Hi, everyone! This blog post will be about my journey of getting into Google Summer of Code program. I learned Ruby on Rails in my second year of bachelors degree@NITK and have been learning since then. I worked on a Management Information System of my university, called IRIS for over two years which was built on Rails. I applied to GSoC for the first time this year to a project on rubygems.org in Ruby organisation.

I made a proposal for only one project which involved adding new features to rubygems.org. I got in touch with sonalkr132, the mentor for the project and he suggested me get involved with the community and try to send some PRs to open issues. On his suggestion, I worked on following issues:

For my proposal to the project, I worked in writing a RFC explaining the need for the project, detailed flow and design. 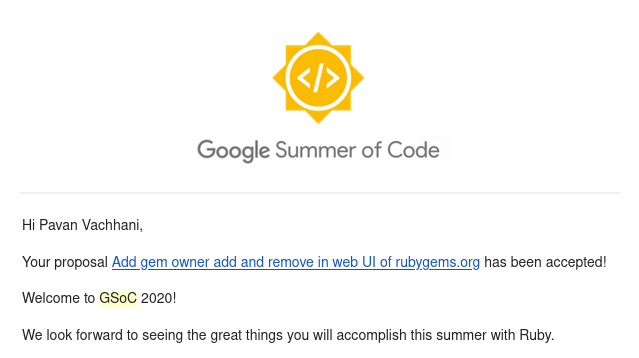 My project on rubygems.org was to add feature for adding/remove gem owners via UI as an alternative to gem owner -a/r via CLI. The next part of the project was to implement a new flow for ownership transfers where maintainers of the gem can look for co-maintainers or new maintainers and smoothly transfer ownership.

There had been discussions about taking over maintenance of gems, transferring ownerships of gems whose maintainers are not interested in maintaining the gem for any reasons. A lot of discussion around this idea by Benjamin Fleishcher and some related work is here:

My work on this project will be a step towards easing the process of ownership transfer for the maintainers of the gems and hopefully reducing the cases of abandoned projects.

More details about the project:

I would like to thank my mentors and friends who supported and guided me throughout the application process - Mohit Tahiliani, Aditya Prakash, Mishal Shah and the Ruby and NITK Opensource communities.