gem is a standard format for distributing Ruby libraries or packages provided by RubyGems package manager. rubygems.org is the Ruby community’s gem hosting service to publish and fetch gems. The user of RubyGems who has permission who push/yank any version of a gem are called the owners of that gem.

My Google Summer of Code project with Ruby was focused on “Adding functionality of add/remove gem owners via Web UI”. The aim of this project is ensure frictionless management of ownerships without setting up CLI. This project will also help continue maintaining gems by pointing interested users to gems which need maintainers and reviving unmaintained ones.

This blog post is for my final submission of GSoC project.

Under this project, there were 2 parts to be implemented:

Pull requests created in the period of GSoC:

When a rubygem has multiple maintainers, it is important to keep track of all the owners who have access to push, yank or add more owners to the gem. Currently, gem owner --add and gem owner --remove commands are used to modify the owners list for a gem. The goal of this project is to add features of adding/removing the owners using Web UI of rubygems.org without the hassle of setting up CLI. Alongside, the functionality to notify the owners about changes in the ownership of the gem they own is to be added to the API and web which will improve mitigation time of unintended access.

The next part of the project is about the transfer of ownership. The goal of this feature is to provide the gem maintainers with a platform within rubygems.org where they can look for new maintainers of the project. The owners of a gem can open an ownership call visible to all the users of rubygems.org who can apply to the call. The owner can choose from all the applications and the users will be added as owners.

The first part of the project involved three major components:

Before adding features of adding or removing owners via Web UI, I had to modify the existing API endpoints POST - /api/v1/gems/[GEM NAME]/owners to add email confirmation before a user is added as an owner. This modification was necessary to avoid adding a new owner without any confirmation from the user being added as an owner as it can potentially lead to email notification spamming. The confirmation step on owner addition, we will avoid sending unsolicited emails. 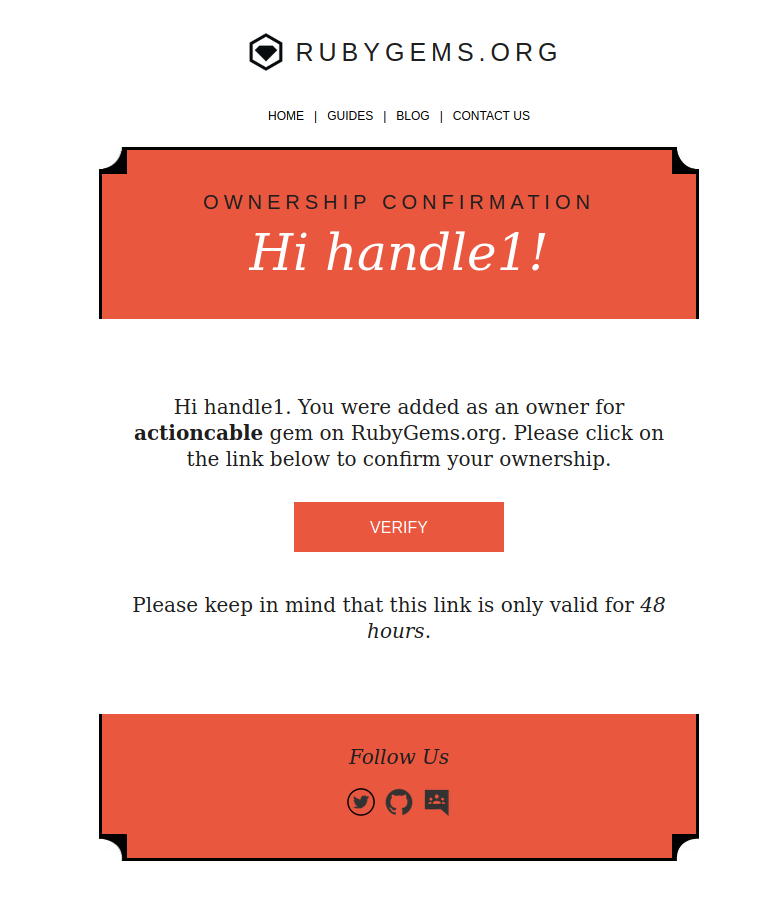 Next part I worked on was to add controllers and views for listing, adding and removing owners of a gem. I added new routes as below:

With suggestions from my mentor Aditya and other members of the community, I added extra information about the owners like MFA status along with data for auditing the ownership changes like owner added date and the user who added.

I worked on two different UI designs for the ownership page. After a lot of discussions, suggestions and changes, final UI looked as: 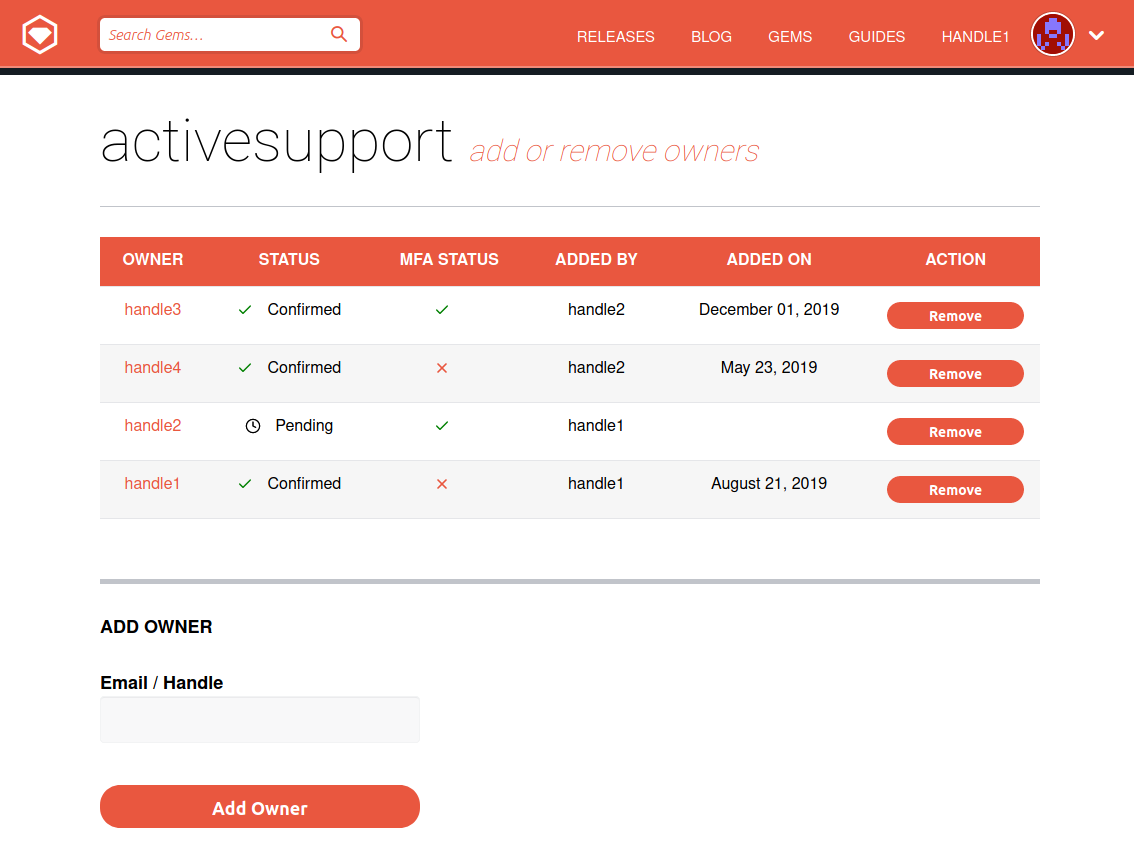 A special thanks to Hiren for providing constructive feedback and suggestions.

Aditya suggested adding password verification of users before performing any sensitive actions of adding and removing owners. This would help mitigate any unauthorized access due to active browser sessions of logged in users. With this feature, a logged in user will be asked to confirm the password before performing any actions related to owners of a gem. After confirming the password, user won’t be asked again for next 10 minutes.

The second part of the project involved two major components:

There are a few cases when a gem needs new maintainers:

An ownership call can be opened in any of such cases. Users who are interested in taking the project further can apply and contact the gem owner easily. 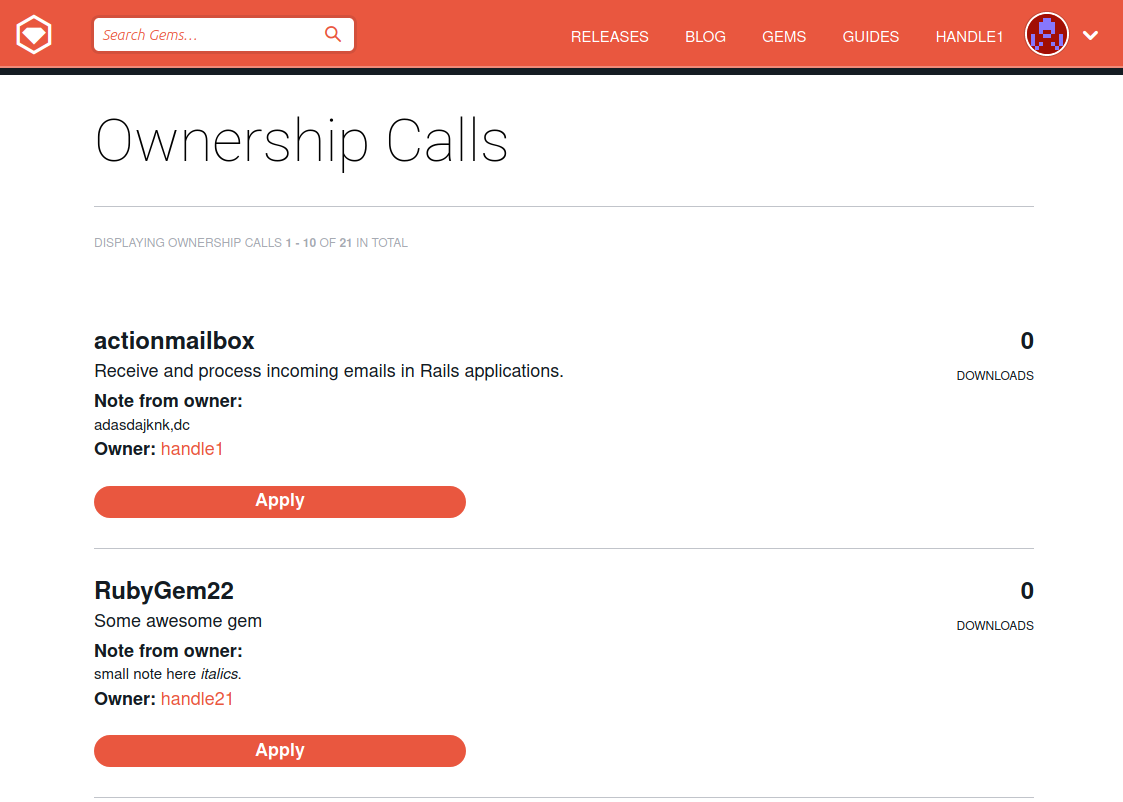 Next was to implement functionality for users to apply to a call with a small message for the owner. After a user applies to a call, the owner will be notified about the applications using a digest email. Then, the owner can accept any applications and close the rest.

I also implemented an endpoint GET /profile/ownership_calls to list all ownership calls and ownership applications made by the user at one place.

Work Left To Do

The review for ownership transfer PR is pending. Based on the review comments, I will have to make the changes if required to get the PR merged.

I have posted my weekly updates on Ruby GSoC blog here.

It was wonderful working with Ruby community throughout the GSoC project. I would like to thank Aditya for patiently reviewing my code, giving constructive suggestions and guiding me through the program. Thanks to Hiren and the members of Ruby Community for helping with their suggestions.

It would like to thank Mohit Tahiliani sir and Mishal Shah for motivating and guiding me in applying and getting through the whole program.

Final thanks to Google for organizing this amazing program. I feel GSoC made it easier for me to get started with open source contributions. I saw ideas getting dropped after PR was complete(#2264), complete change in implementation(#2339) and work done by me being deployed through the program. It was a great lesson on how projects are built and maintained with great quality. I am excited to continue contributing to the open source community.